skip to main | skip to sidebar

“Good stories. Good company,” says Boston Bruin alumnus Bruce Shoebottom as he recalls time spent with Ron Duguay, the ex-New York Ranger with whom he had played on the now-defunct San Diego Gulls.

Good stories, good company: the crux of Shoe’s story in the minors, playing for teams who either folded or fled to more financially friendly environs. Nowadays, Shoe is busy driving his daughter to hockey games, recruiting salespeople for Glacial Energy, raising money for charities—such as the Travis Roy Foundation and Positive Thoughts for Keri—as he plays for the Boston Bruins Alumni, and answering questions about his hockey history.

“The OHL (Ontario Hockey League) is the fastest way to a pro career,” Shoe, a defenseman drafted by the Los Angeles Kings in 1983, says. Great coaching propelled the Peterborough Pete to New Haven, Connecticut. He played in only six games for the Nighthawks, yet Shoe recalls how the parking lot at New Haven Veterans Memorial Coliseum had been built on top of the arena. “Kind of a crazy architectural design, but they made it work,” he says.

Fast forward to 1987, to Portland, where Shoe played for the Maine Mariners. His teammates that season included Lyndon Byers and Don Sweeney. His coach, Mike Milbury, had ended his playing career in Boston the prior season and then signed on with the Mariners, in their first-year as a Bruins’ affiliate. Shoe says, “Milbury wanted to instill Bruins tradition and mentality. This meant hating the Habs. “The games,” Shoe says of the contests between the Mariners and the Sherbrooke Canadiens, “always got wicked heated.” During one game, his coach becoming so enraged. “Milbury threw all the sticks on the ice. Travis Roy went on the ice and picked them all up.”

“Great person. Great kid,” say Shoe, who would spend four seasons playing for both the Mariners and the Bruins, about Roy, the Mariners’ twelve-year-old stick boy whose college hockey career would last but Eleven Seconds. Roy remained in the Pine Tree State, even after the Mariners moved to Providence, and Shoe migrated west, to the Sooner State in 1993.

“Great opportunity,” Shoe says of his first year in the Central Hockey League. “The Blazers were the biggest thing in Oklahoma City.” He recalls about 10,000 fans a game at the Myriad (later officially renamed to Cox Business Services Convention Center), where he played forty-three games for former Colorado Rockie Mike McEwen.

In 1995 (a year after the New York Rangers had won the Stanley Cup) Shoe joined the San Diego Gulls for their first year in the West Coast Hockey League. His coach was former foe, Sherbrooke Canadien Steve Martinson, and his new friends included Chad Wagner, Brad Belland, and, of course, the former New York and Colorado Ranger, Duguay.

Shoe says of the latter, “One thing you learn from (playing with) him is—you get all kinds of things on the Internet—he was soft-spoken, didn’t talk too much about the Rangers and his time in the Big Apple.” Not until 1996, after the Gulls had defeated the Flying Falcons to win the Taylor Cup, when on a charter flight from Fresno did Doogie loosen up and share with Shoe, Wags, and Bellie, a tale or two about his time in the NHL. Good stories and good company, indeed.

If the spirit moves you, please donate to the causes near and dear to Shoe:
Travis Roy Foundation

Thanks to www.hockeydb.com for chronology and statistics.
Posted by Jim Dwyer at 4:31 AM 1 comment:

“We didn’t win too many games,” says former Colorado Rockie forward Wilf Paiement. “So the memories weren’t that good,” he adds, laughing.

But Paiement, who will forever lead the woeful Rockies in points (254) and penalty minutes (336), does have a few fond reminiscences of his time in Denver.

A first round draft pick of the Kansas City Scouts before that team moved to Colorado, Wilf remembers how Krazy George could whip up the often meager crowd at McNichols Arena. “He was cool,” Paiement says. “He created atmosphere.”

Krazy George wasn’t the only rabble-rouser in the house.

Paiement recalls an incident with Don “Grapes” Cherry and his English bull terrier, Blue. Wilf and teammate Ron “Chief” Delorme used to arrive for practice about three hours early, so they’d more often than not have the locker room to themselves. Or so they thought. One morning, the two had all but undressed and were about to don their hockey gear when Blue ran, barking, into the room. Paiement says, “This dog was harmless. I had seen him before, who cares. But Delorme, he was afraid of dogs. I mean really afraid of dogs….”

The two grown men leapt, reaching for the nearest coat racks. Grapes heard the commotion and walked from his nearby office to the locker room. Wilf recalls his coach saying, “You two look really good on those coat racks.” Paiement laughs when he thinks of two 210-pound players dangling. “On the ice, we fought whoever, but now we’re afraid of this ten-pound dog?”

Once off the hooks, the players got dressed, practiced, and then returned to the locker room—no sign of the boisterous beast—to dress. In cowboy boots. Paiement says he took to the western way of life, at least looking the part.

He and his teammates often headed for the foothills, to Evergreen, CO, home of the Little Bear Saloon. The bar, which opened in the late 1970s, has a reputation for what the establishment terms “popular pandemonium.”

The tavern is still in business, but Paiement’s popular tenure in Denver was short-lived—like the Rockies organization itself. A fan favorite during his first three seasons with the Rockies, he had played only three months for Cherry (pictured above, with Paiement) before management traded Wilf, with Pat Hickey, to Toronto for Lanny McDonald and Joel Quenneville.

After stints with the Leafs, Nordiques, Rangers, Sabres, and Penguins, Paiement retired in 1988. Thirteen years later, he returned to the Mile High City. “I went to the All-star game in Denver,” he says. “I thought I was going to McNichols Arena.”

He was shocked to learn that Big Mac had, a year earlier, been reduced to rubble.

These days, Paiement, retired and living in the Greater Toronto Area, is still popular on the hockey charity scene. He plays in about fifteen games a year. In these non-checking contests against local companies and organizations, Wilf has skated with former Rockies such as Bobby Attwell and Jack Valiquette. No doubt they’ve swapped a story or two about their playing days in Denver.

The Rockies didn’t win many games, and Paiement won't accrue many points or PIMs; but may his popularity never wane.
Posted by Jim Dwyer at 5:41 AM No comments:

Long Live the King of Krazy 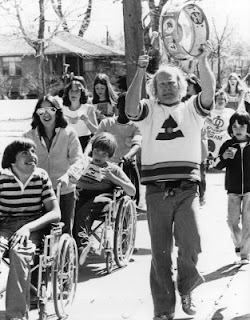 Krazy George—the drum-banging, raspy-voiced, rabble-rousing professional cheerleader who conducted his Wave experiments in Denver in the late 70s—had tested his talents for the local professional hockey team at McNichols Arena, and the results were in.

Fans who had enjoyed Henderson’s antics during a handful of tryout games called the club—something management had encouraged them to do as part of a radio campaign—with favorable responses. The Rockies hired Henderson for the rest of the season.

Krazy George then went to work…on the likes of tough guy Dave “The Hammer” Schultz.

Henderson remembers that his confrontation with Schultz started this way: “One game, I was doing cheers, and he was arguing and crying.”

This taunting troubled the Hammer. “He smashed his stick on the ice and was screaming and cussing at me,” Henderson says, adding, ““I screamed back at him.”

According to Henderson, Schultz (who did not respond to e-mail to provide additional color commentary) countered, “If I ever see you again. I’m gonna kill you!”

A month later, Schultz was back in town. In the bowels of “Big Mac” before the game would start, Krazy George and the Hammer—neither with their game faces on, walked toward each other.

Schultz extended his hand toward Henderson, who followed suit. The two shook hands, and Schultz explained that his on-ice antics were often choreographed: Every time he went ballistic (wink, wink) against an antagonistic crowd, his employers had to pay him additional money.

During the game, Henderson hurled insult after insult at his target. “I was having fun, going crazy,” Henderson says.


Schultz cussed and screamed up a storm as he charged toward the Plexiglas, closer to his drum-banging nemesis. The referees pulled Schultz from the barrier and then escorted him toward, presumably, the sin bin.

But before Schultz skated away, he winked at Henderson.

Henderson also impressed Canadien Serge “Le Sénateur” Savard, the Habs’ captain who would be inducted into the Hall of Fame in 1986. After one game, Savard relayed his team’s sentiments to the Rockies’ ringleader.

Henderson and Savard were in the tunnel leading to the visitors’ dressing room. Krazy George remembers, “All at once—and I’m about a foot from the wall—he takes his stick and crosschecks me against the wall.”

Savard then said, “You have more noise here with 5,000 (fans) than we have in the Stanley Cup playoffs!”

Henderson, who still has that stick, considers Savard’s statement the greatest compliment a professional cheerleader could receive. To this day, former opponents tell him how fun he made those games at Big Mac.

“Ninety-five percent of the players I cheer against love me,” say Henderson.

Find a Rockies’ fan who didn’t love the guy. Besides stirring up support for the home team, Henderson also played goalie in a between-periods exhibition game. He would have preferred to stay in the stands.

“They scored ten goals on me in seven minutes,” George recalls. “Never again. But that’s ten goals against in a whole season. That’s the way I look at it.”

At Big Mac, Henderson’s high-energy hijinks used to whip Rockies’ fans into a frenzy. But away from the arena, Krazy George was also active. He visited many grade schools in Colorado, often dressing up in hockey attire to pump up his young fans. And, as seen in the photo above (courtesy of www.krazygeorge.com), he also drummed up support for local charities.

Big Mac was demolished in 1999, but the memories of Henderson’s four years in Rockie Hockey country will live on, as does the King of Krazy himself, who’s still for hire.
Posted by Jim Dwyer at 1:03 PM No comments: